The key to good orchard structures is to ensure that the end assembly anchoring at the ends is strong and secure. Kiwifruit end assemblies are prone to failure with the extreme loading put upon them by large crop loading which just keeps on increasing the closer the crop gets to
picking. If the anchoring is not set deep enough the anchor posts will pull or if the posts are not aligned properly they can pull off to the side.

Back in the nineteen eighties there were a lot of T-bar orchards as it was seen as a convenient way of cropping kiwifruit. It quickly became apparent that the cropping volumes and returns off pergola were superior and a lot of T-bar kiwi fruit support structures were converted over to pergola. However the end assemblies were often not upgraded and tended to fail. Not only that but the turning bays at the ends of the orchard rows were very generous. With the advancement of machinery and artificial shelter structures, a lot of the end assembly structures were rebuilt and extended to get more canopy area.

The incorporation of old railway irons wired or bolted onto the end posts also provided much valued canopy area. Wire rope end assemblies developed by innovators like Wayne Petly quickly became popular. However all these innovations and increased crop loading put more
and more pressure on already groaning posts and wires. Adding in additional posts and anchors became a necessity. Some of the posts of the eighties also had substandard treatment resulting in premature degradation and breakages.

With the advent of the new gold kiwifruit varieties as well as better orchard practices with green production, the crop loads of kiwifruit have increased steadily over the years. The orchard structures that were originally put into place were not designed to support this loading. Back in the nineteen eighties the average green production was around five and a half thousand trays per hectare. Modern gold varieties can produce four to five times this amount as well as bigger fruit. Any weaknesses or incorrectly installed parts of the original orchard structures quickly show up. End posts that are not correctly aligned can be pulled sideways allowing the canopy to
sag. Posts can be strangled by wire weakening them and causing them to break. Once one goes, others follow suit.

Once an area of end assemblies starts to fail it is often better to replace all of the end assemblies and run a new cable to attach the support wires to. It is easier to get a tractor and post rammer into the ends without old posts being in the way. It becomes more efficient as well as being cost effective definitely in the longer term and often in the short term, especially if we
can avoid any plant damage.

There is also a shorter time factor for construction resulting in less disruption to pruning programs Modern orchard development follows a tried and tested methodology that has been well thought out over the years. Tauranga Fences follows these good practices in the construction of all the kiwifruit end assemblies that we install.

Check out our recent work 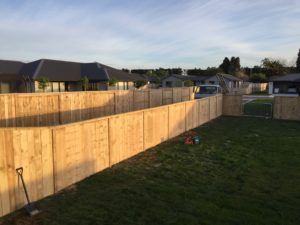